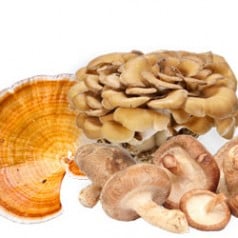 Traditional Chinese Medicine, increasingly settled in The West, gives us the opportunity to incorporate in the health sector extracts from natural products such as fungi, with a beneficial impact on the Mediterranean diet.

Traditional Chinese Medicine, as well as Japanese and Korean Medicine, have got a long tradition regarding the consumption of fungi (especially edible mushrooms) due to their nutritional or gastronomic interest, and because for thousands of years some fungi have been considered of medicinal interest by these cultures.

The first book where medicinal mushrooms were mentioned was Shen Nong’s Herbal Classic (around 2,700 B.C.). Fungi species like Ganoderma lucidum, Lentinus edodes or Grifola frondosa have been harvested in nature for hundreds of years and have been recently cultivated and marketed by using the organic farming method.

Stress in our lifestyle, bad eating habits, environmental pollution and, of course, seasonal changes, contribute to the appearance of deficiencies in our body that manifest as tiredness, fatigue or weakening. Traditional Medicine has used mushrooms to relieve such deficiencies, specifically thanks to the presence of beta-glucans (intertwined sugars), which have been widely studied in Japan, as well as in Europe and the United States.

Shiitake (Lentinus edodes) is the second most cultivated fungus in the world. Its Japanese name refers to the tree where it grows, a species of chestnut (Shii).

In traditional Eastern Medicine Shiitake is considered a blood-activating food and is used for treating colds, viral processes and other conditions such as stomachache or headache.

Humid and poorly lit wooded mountains of Asia are the natural habitat of Reishi (Ganoderma lucidum). It is a large, dark-coloured mushroom with a shiny outer layer and woody texture. Unlike Shiitake, it is not edible because of its bitter taste and hard consistency, so it is administered as an extract. Reishi contains numerous bioactive components beneficial to the body, including terpenoids, complex sugars, fatty acids, proteins and trace elements.

It has been traditionally used in China and Japan where it is known as the “mushroom of immortality” because it is considered a superior tonic for prolonging life, preventing ageing and toning the heart. It is also considered to have marked positive effects on sleep and mental well-being. Reishi was recently included, in 2000, in the Pharmacopoeia of the People’s Republic of China.

Maitake (Grifola frondosa) is known in the Japanese culture as the “dancing mushroom” because its shape reminds of a butterfly dance and because people who consumed it regained their health. Maitake grows on trees like pines in temperate forests. It has got vitamin B1, B2, B6, niacin, folic acid, tocopherols, vitamin C and vitamin D; minerals such as potassium, phosphorus and magnesium, zinc, sodium, iron and calcium; free sugars like glucose, mannitol; and organic acids: lactic, acetic, malic, citric, or oxalic among others. Maitake is a nutritional mushroom really appreciated for its flavour, but in addition to its culinary uses it is also a species widely used in traditional Eastern Medicine to relieve gastrointestinal discomfort, as an antioxidant and against inflammation and pain.

MARNYS® has created the line ß-glucanforte, developed with extracts of mushrooms like shiitake, reishi, maitake and hericium, cultivated following the Organic Farming standards and with a high extraction ratio that makes it one of the most powerful and effective lines in the market. 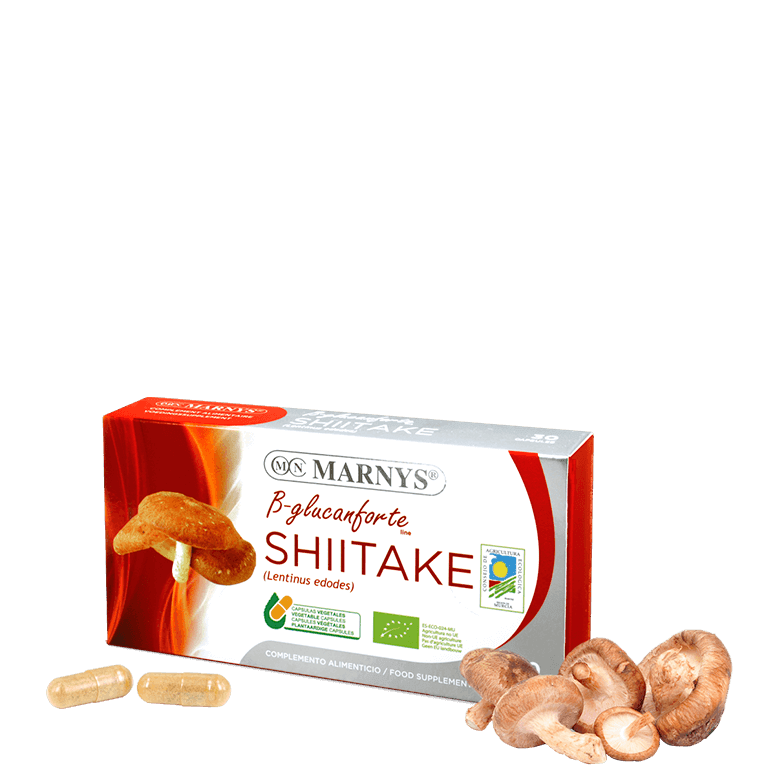 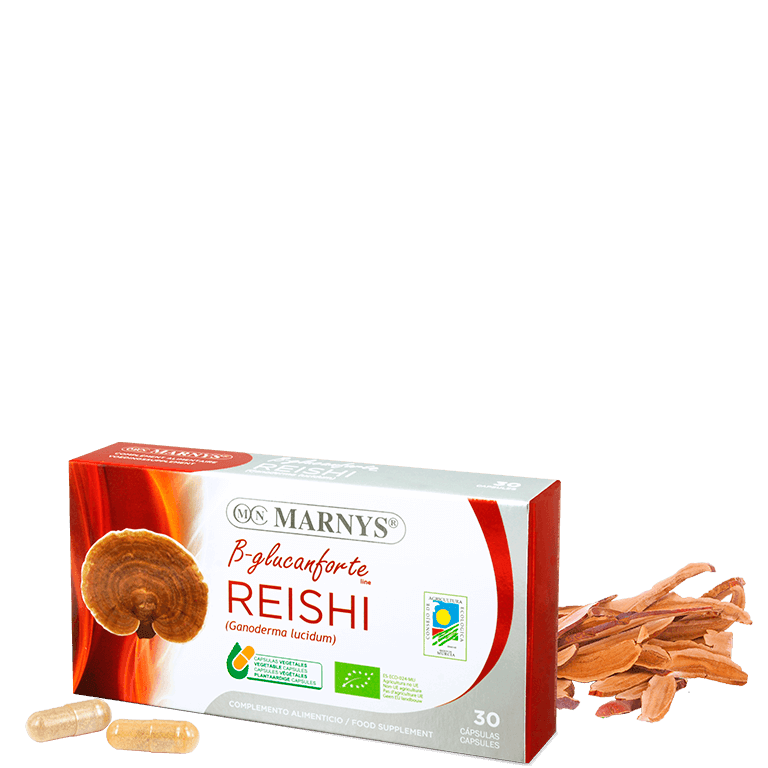 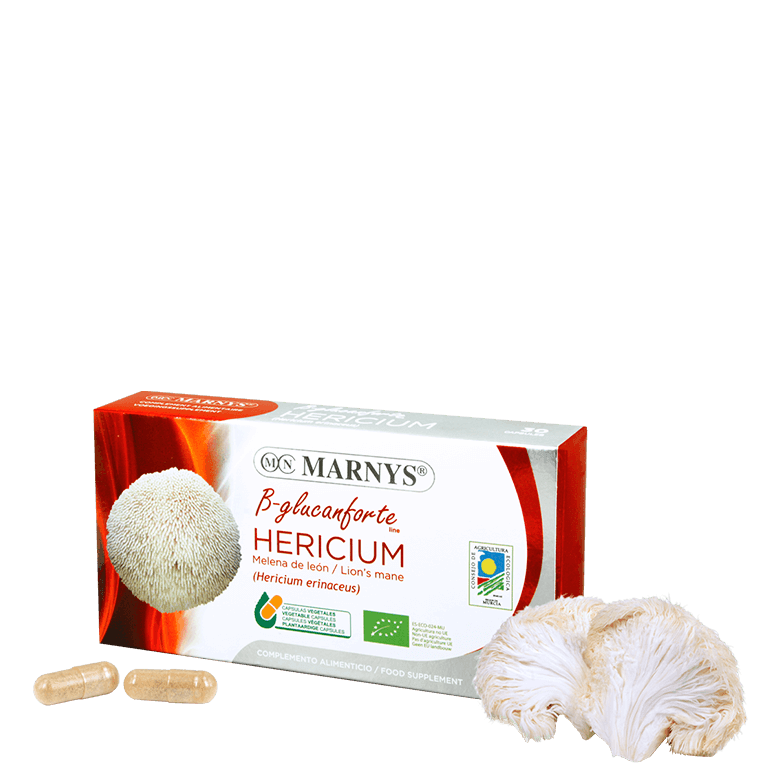 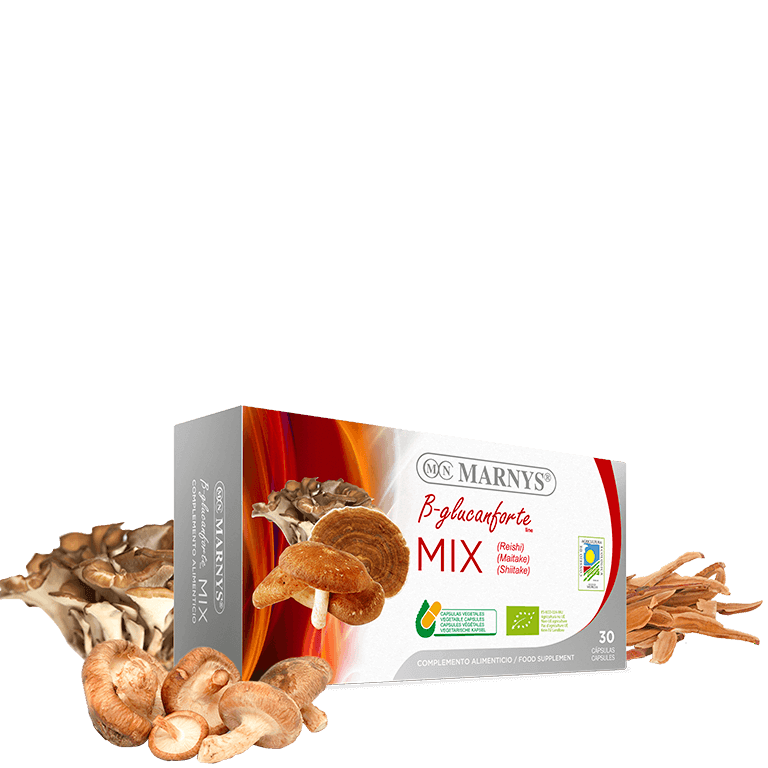